skip to main | skip to sidebar

In Praise of Weeds?! 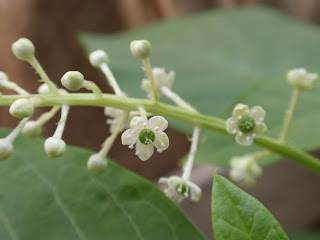 I was given a very 'enlightening' article describing a Buddhist take on weeds. The general message was, I think, "love thy weeds" because they keep you humble.... and sane, and grounded in reality.... (a.k.a. digging in dirt)
I do have a kind of love/hate relationship with mine, it's true. It IS a therapy of sorts to get out there and pull them up. If one never had any weeds, then we wouldn't be NEEDED so much in our gardens. Add a sprinkler system to a weed-free back yard and you might as well watch the garden on T.V.
Occasionally I see truly beautiful weeds and I leave them for a while.... So, o.k., I think I get it.
"Everything is as it should be."
(P.S. This is my favourite weed right now, and I am enjoying seeing how big it will get.)
Posted by Cathy at 8:28 AM 2 comments: Links to this post 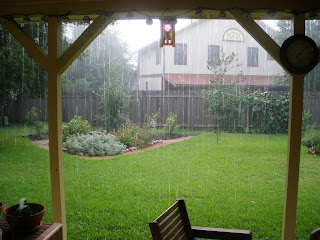 Just kidding! Did I mention that I live in a tropical rainforest? Yep. And here's a newsflash: Plants like rain! Check out some of the happy plants....
Posted by Cathy at 11:02 AM 3 comments: Links to this post 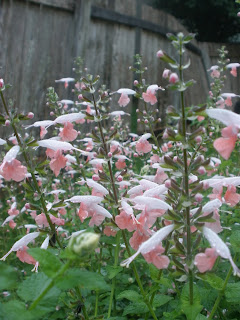 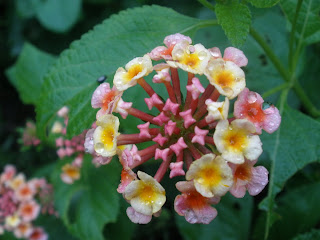 And, the Crazy Fungus is back!!! 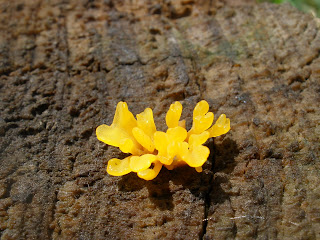 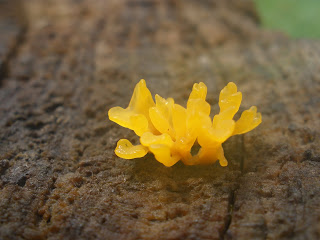 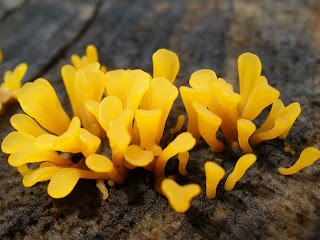 Here they are, back in all their glory. You can see the steam rising off the wood on one of the photos... Pretty amazing, eh?
I'm certainly never getting rid of this stump that's for sure.
I wonder if fungi each have a particular name. Hmm, well until I find out, they'll have to make do with Felicity and Frederick.
Posted by Cathy at 10:52 AM No comments: Links to this post 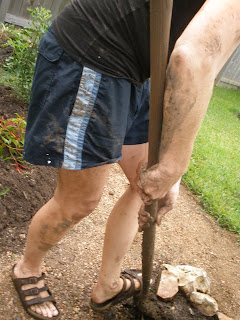 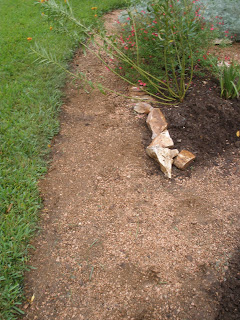 I am sure that the whole world has been waiting with bated breath to see if I was going to make good my threat of Saturday morning to launch an attack on the dastardly weeds that have encroached on my crushed granite paths and flower beds. (Well, possibly not the whole world, but maybe my loyal followers? she says hopefully) Of course I followed through! Sunday afternoon I doned my invincible armour of OFF, and laughed in the face of that pesky weed protection service. Those mosquitoes could do nothing but fly around me in futile fury, as I went to work on reclaiming my garden. Cheered on by plants that had been in danger of being overcome by wild green radicals, I battled on. Not even deterred by the heavy rain, I once again put paid to the weed invasion and brought order and serenity back to the land. It took several hours but I am nothing if not stubborn! And no, I didn't get all the roots of all the weeds, and yes, they will come back. Because you see, for whatever reason, the weeds just don't ever seem to realize who is the boss. But that would be me. And I am here to say that I may not be the best gardener, but I am pretty sure I am one of the fiercest guardians of any garden. So there. (And besides it was SO fun and satisfying getting that muddy) I love you garden.

Posted by Cathy at 6:28 PM No comments: Links to this post 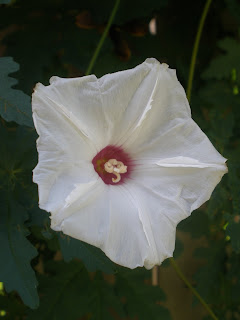 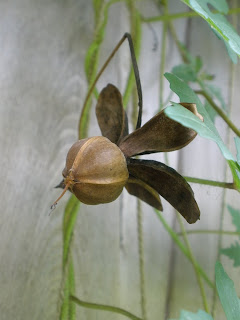 On a different note from the previous entry, we say a BIG HURRAY for a new season of incredible blooms, and equally delightful seed pods on the Alamo Vine. A round of seeds, on the house, for all who need them!
So, I have decided that I have two series of photographs, of which we have an example of each right here. There is "Beauty in Bloom", and "Beauty after the Bloom." It is hard for me to decide which series I prefer as both are lovely, but I think I lean towards the "Beauty after the Bloom" series. Hmmm. Why, yes there is IS beauty after the bloom isn't there. Could this be a reflection of my own state of being?
Posted by Cathy at 6:23 AM 2 comments: Links to this post 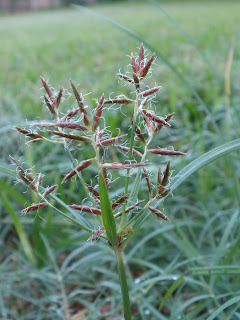 It's Saturday at 7:30 in the morning, and I would like to be all curled up in bed, but my mind was working over time on things I'd just as soon not be thinking about. So, as a soothing balm, I decided to see what was happening outside in my yard. The first thing the yard pointed out to me was DID I REALLY THINK THOSE WEEDS WERE GOING TO GET RID OF THEMSELVES??? o.k., no, clearly not, and, they have obviously decided to have a party while I'm not looking and invite ALL their friends. Well fine. Have your fun I say, because it won't last. Don't think I don't know you're there. In fact I got up close and personal with this one, because quite frankly, I had never seen it flower before. I am willing to admit it has a certain 'je ne sais quoi' about it, but I am not saying we are friends now. It IS growing in the middle of my crushed granite path after all, and will have to go.
But in the end not right at this moment, because it must have hired a protection service, as I was swarmed by a nasty bunch of early-morning,-night-before-rain-loving mosquitoes. Curses. I beat a hasty retreat inside but swore revenge over my shoulder as I went.
Posted by Cathy at 6:00 AM 2 comments: Links to this post 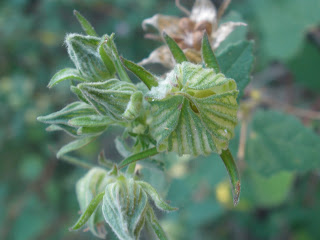 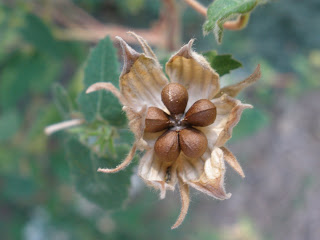 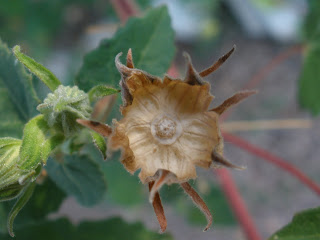 Three more stages in the life of a Rock Rose. Each one is so beautiful. I love the shadow of the seeds that remain in the empty husk.
Posted by Cathy at 8:23 AM No comments: Links to this post

More about the Fireweed (or Firebush) 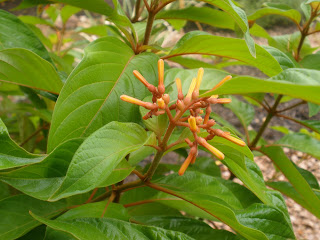 The Mexican Firebush is starting to get some FIRE, hurray. The formal name is 'Hamelia', and we found this one at a nursery out near Fredericksburg, but I have also seen it here, at the Natural Gardener, at The Great Outdoors and even Home Depot. It can get quite a bit bigger I understand and it gets dark purpley berries, and the leaves also get a firey-red colour in the late fall. The "fire" flowers can be this orangy-yellow colour but also more red. It really is great.

One thing to note. Mine seemed dead in the spring, and I was mourning the loss and getting ready to by a new one. Then I read that it does come back, but it takes a while, and most people are too impatient and give it up for lost. SO, I decided I was not going to be one of THOSE people, and I exercised every ounce of patience I could muster, (only poking at the ground occasionally), and low and behold it really did come back. I hope you will come to love it too.

Posted by Cathy at 7:25 AM 2 comments: Links to this post

Cathy
Austin, Texas, United States
A Canadian living in Texas learning slowly, slowly about dirt and plants and trees and what grows and probably more frequently, what doesn't... and wishing that gardening would count for exercise. And now, I have to leave my beloved garden and start jogging up and down to the Acropolis every day. At least I'll have the exercise thing covered. Now back in Austin, and finding out what it's like to live with TWO cats....